Preparing for the planting season in NYC.

This blog entry would have probably provided more value to the readers, had I posted it in April instead of close to the end of the growing season, a few weeks away from harvest. However, given all of the pointers I learned along the way I found so valuable to amateur growers and homesteaders, I needed to post it. “Better later than never” as they say.

My return to NYC after some time traveling the Midwest, was really looking forward to finally planting some of the vegetables and herbs that grow well in the climate of New York City in early May.

A neighbor who lives across the street really got my planting moving rapidly by providing me with five large planters that had nice, rich fertilized soil. With the large planters in place, I was needing  some smaller planters for the smaller vegetables I would be planting as well as additional fertilizer for my reserve. As someone who cooks almost daily, I knew I would want basil, dill, rosemary and a few other herbs that I would decide upon once I reached the nursery. The packets of eggplant, beefsteak, heirloom and green grape tomatoes, cucumbers, squash, 4 types of peppers, strawberries held between four and six tiny plants, so not really understanding how much room they would occupy in the yard, I bought more than I actually needed. When I got back home and began the transfer from the packets to the planters I was beginning to understand the yard could not possibly hold all of the vegetables I had purchased, given that it is suggested that all plants have a spacing between 12 to 18 inches.

I then measured the yard and my suspicion that there would be a lack of plant-able dirt, was realized so I needed to make a planter box for the herbs that would not have deep roots. Using some of my parents old sliding wardrobe doors I measured, cut and nailed the planter together. 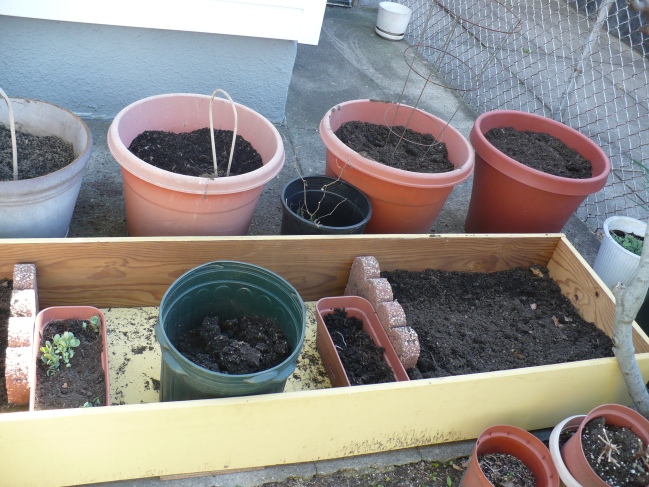 It became glaringly obvious once the plants were planted in the soil and had a weeks worth of growth, that the planter was not deep enough to be useful for any vegetable or herb that I purchased. In theory this planter box would provide portability and allow more room in the yard for the vegetables, which really were my priority. It now became a frame for the mini planters and it began to seem that the only real use of my golden planter was to prevent the small pots from blowing over in the wind. 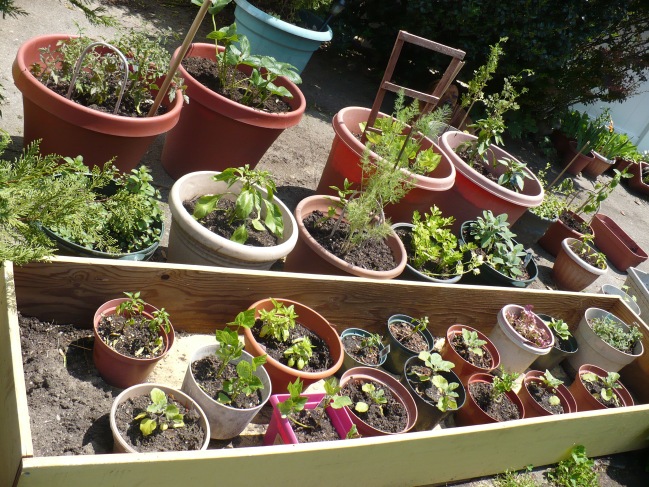 After three weeks in the smaller planters I decided to tear up the entire back yard which was a neglected mess of crab grass and weeds. This was a new home I just moved into so the state of the backyard was not of my doing. There are tools to rent to be able to tear up the grass but did not extend deep enough to pull the root from the bottom. Over the course of one weekend, two ten hour days, I took a hoe and dug the yard, pulled clumps of unusable grass and weeks by hand. Even after shaking as much dirt as I could form the clumps I was pulling out, I still managed to fill four garbage cans to the top.

Spent some years making my way around the cities and states, working, learning about new food ideas and planting and eating my share. Making my points about rejecting the corporate take over of our food source to my opinions about the New York food scene. LASTLY: No matter the size of my living area, I am always growing herbs & vegetables and enjoy the nurturing experiences of the growth to the nutritional value it gives from the table. END_OF_DOCUMENT_TOKEN_TO_BE_REPLACED
This entry was posted on Tuesday, September 10th, 2013 at 4:15 pm and tagged with #gardening #vegetables #NYC and posted in Supporting local dining establishments by avoiding chain eateries. Homesteading in the city.. You can follow any responses to this entry through the RSS 2.0 feed.
« Forecasting Food Prices.
The Ease of Herbs. »

Leave a Reply and I Will Get Right Back to You. Cancel reply

This site uses Akismet to reduce spam. Learn how your comment data is processed.