As I bang away at the keyboard recalling last nights taco’s, I find four stars just does not give the credit that this Jackson Heights taqueria justly deserves, it is a full five star experience..

Cool color schemes in the back dining area, heavy on the bright orange and the toned down lime green makes one feel very at ease, in a romper room meets bikini bottom sort of a way.

First stop before the ordering begins, a quick visit to el bano. As I was going about my business in there, the strong smell of Clorox was in an odd way, a pleasant initial fragrance as no bacteria could survive in there. However within a few seconds my eyes began to sting as the vapors were so strong. I appreciate the cleanliness but there should have been some notification.

Each taco runs $2.50 and they pack them full with your meat choice and for no additional up-charge you get a slathering of guacamole and some Mexican white cheese sprinkled atop the guac, creating a perfect balance of flavor.
As other reviewers have pointed out the Lengua stood out and I have to agree. In my mind and to my taste buds it stood heads above the other taco’s I had ordered which were the carnitas, asada and pastor. However, comparing meats as to which is better is not very different from comparing which flavor of ice cream is better, its all personal preference. But the texture and the way the meat  dissipates in your mouth, in-part due to the vapor process, had me feeling like the lone explorer on starship coatzingo orbiting deliciousland.

Two Micheladas to drink, as I reached for my fourth taco and all was right with the world.

The Best Gyro in Queens 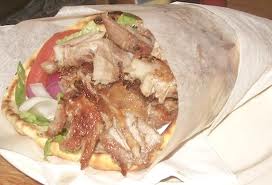 20002 Northern Blvd
Bayside, NY 11361
(718) 631-0147
When put in the difficult position of going to a Gyro spot I have never been to before, I made haste to the door, fumbled for my keys and made a dash for the truck like gang busters.
Once we arrived and I settled in with the help of Mytho’s, a wonderfully balanced and semi sweet Greek beer.
“Don’t bother looking at the menu” stated my well versed foodie buddy so without hesitation, I slammed the menu shut and began the painful waiting period, all the while picturing images of Gyro, dancing in my head.
Two Gyros, well done and a side of tzatziki sauce was the order and when it arrived I was surprised by the size of the gyro. The pita was not any larger than average, yet was almost unseen behind the hunks of meat protruding from the foil. The gyro meat was literally falling out and off from all sides.

My buddy began applying hot sauce and red pepper all over the mogul of meat, so I followed along with no hesitation. (Try it if you like your food kicked up a notch, it works.)

The hint of saltiness from the gyro meat mixed with the sharpness of fresh onion and the almost sweetness of the fresh tomato, gives me full reason to rate the gyro as a five star eating experience, having had nothing else prior to eat at Fontina’s.

My guess is that most all of us food lovers may have had this embarrassing experience happen to them. You have a friend you are taking out to dinner to dine at a restaurant that serves a  cuisine that is new to them, that you believe they will really enjoy. Unfortunately the experience winds up being a complete flop.

First the food fiasco:
Samosa were overly crispy and close to burnt rather than properly fried, small portion so the dumpling shell overshadowed the peas and potatoes.

The Hummus and Garlic Naan was probably the high point of the evening’s dishes which says something as it is a basic appetizer. The hummus was, in my opinion not made in house and served in a 2 oz cheap metal ramekin which went poorly with the Naan. The hot garlic atop the warm bread with cold jarred hummus just did not work well together. The Garlic Naan was overall a nice starter, if served by itself.

The Service:
Our stubby and very disinterested server asked me if I wanted to order our entree a total of two minutes after I ordered the appetizers. It appeared this bulbous headed little individual was seeming looking to bail out of work early on his shift for the evening’s food service. In no way was this about to sway my desire to have our meals come out of the kitchen, timed to normal appetizer/ entree staggering.

To perhaps make a ‘point’ whatever the point he thought he was making was, when I was ready to order and signaled him, his eyes remained fixed on some pointless toil behind a counter taller than he, maybe it was a stack of yellow pages. Even after he was verbally instructed to attend our table our Indian Napoleon server still did not seem to have any desire to move with any level swiftness.
The other food runners were smiling, friendly and enjoyable to deal with. where they dug this guy up from I care little to know.
After placing the food incorrectly, I asked if it was typical for the Goat Vindaloo to be served ground up like chopped meat as opposed to on the bone. He looked me all glassy eyed and nodded as if to say yes. Wrong answer, you mixed up the meals, because you did not know the difference and tried to explain your way out.
I really take exception to servers not knowing most everything about their menu. Take some pride in your job and learn the damn menu.
The other order, Kheema Matar, which on the web site shows $11.95 was actually $14,00 (in all fairness the menu did state the correct price) and was terrible. Minced Lamb? What part did they mince? The ears, nose and tail?  Hey, throw some under cooked peas on top and serve it up. Yuuck..

The Manager:
After witnessing the exchanges the manager came up to inquire about the meal. When I expressed in a soft tone my dissatisfaction, he calmly smiled and blamed the server error(sss) on a “simple misunderstanding”. In my restaurant you can bet I would have comped a drink or two and show legitimate concern for my customers, not brush their feelings off like crumbs left on a table.